I have been producing sports memorabilia since 1993 and over those years have had the privilege of representing a host of sports teams and individuals from around the world.  From New Zealand, these included the likes of the All Blacks, All Whites, Black Caps and Silver Ferns, Colin Meads, Bob Charles, Don Clarke, Martin Crowe, Sean Fitzpatrick and many more.  On the international market, teams included the Wallabies, Springboks and England in rugby,  and in football, Manchester United, Chelsea, Liverpool, Arsenal, Paris St Germaine and even Ronaldo, Rooney, Pele, Sir Bobby Charlton and Sir Alex Ferguson…the list continues.  We have moved on since then into other areas of business with the exception of  the Sir Edmund Hillary Ice Axe which has been retained as a means to generate funds for the benefit of others. 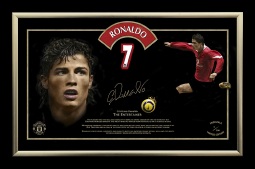 When  the 50th Anniversary of Sir Edmund’s successful ascent of Mt Everest in 1953 came up in 2003 it was an opportunity to not only commemorate the event but also to raise funds in support of Sir Edmund’s humanitarian works in Nepal.

Working with Sir Edmund and the curator at the Auckland Museum we reproduced, with meticulous attention to detail, a replica of the Ice Axe he used on the 29th May 1953.  It was then that I had the rare pleasure of being able to sit down with Sir Edmund for an hour or two at a time while we completed a series of signing sessions and just chat, often over a wee dram or two. What a delightful character he was. Humble, definitely, but he had the inner strength and confidence of a man who had enjoyed the taste of success by what he had achieved for others.  When he spoke it was with a passion for adventure  that very few of us will ever know, and for the people of Nepal who he loved and respected so much.   He still has much to teach our younger generation about motivation, drive and passion along with honesty and sympathy for one’s fellow man.

While these were originally sold as an item of memorabilia to the public, upon his passing we withdrew them from the marketplace as a matter of respect.  It was some time later we re-launched and decided to market them only to charities for fundraising purposes.  The reason for this was the incredible prices people were prepared to pay in the name of a charitable cause.  Sir Edmund’s legacy of helping his fellow man lives on.

If we can assist you in your fundraising endeavours please contact me directly and we can discuss the options.